Belarusian manufacturers should build a strong presence on the domestic market, Belarusian President Aleksandr Lukashenko said as he toured the Stolitsa shopping mall in the center of Minsk, BelTA has learned.

The head of state dropped by a store of a well-known Belarusian confectionery brand. He was informed that the departure of a number of foreign suppliers vacated some niches in this market segment. The head of state set a task to make the most of this situation and increase the presence of domestic brands in the market. 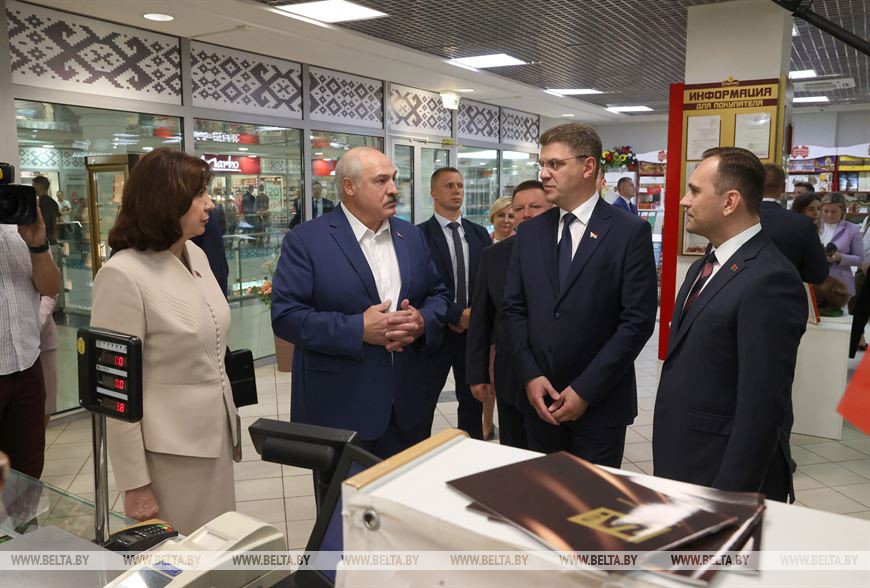 “We have earned recognition in the domestic market and abroad. In fact, we don't need much, we are not a gigantic country... We just need to make sure our people have jobs and salaries,” the Belarusian leader stressed.

There is a great demand for Belarusian confectionery abroad, including in China. Therefore, another task is to scale up production, launch new production lines if necessary. “There is a huge demand in the market. It is necessary to make the most of it and launch new companies and products,” Aleksandr Lukashenko said.

The same tasks were set for the regions. Another confectionery company which products were presented to the head of state, opened a small production facility in Slavgorod in the south-east of Mogilev Oblast. “That's exactly it,” the head of state responded. He emphasized that it is important to launch businesses that create 70-100 jobs in such small towns.

The president also visited factory shops of domestic light industry manufacturers. He was told about the assortment and new products. For example, the demand for linen products has been steadily growing in recent years. The president discussed the supply of raw materials and efforts to increase the presence of Belarusian brands in the domestic market.

“It is necessary to produce what sells well in the market. Well, we should not abandon our traditional niches,” the Belarusian leader noted. Addressing Chairwoman of the Belarusian light industry concern Bellegprom Tatyana Lugina, the head of state told her to be the guardian of the domestic light industry market. He believes that now is the perfect moment to take the vacant niches before someone else attempts to do it.

The Stolitsa mall offers favorable retail lease terms for domestic brands. Aleksandr Lukashenko gave an instruction to scale up this business model on to other retail outlets.

The president also dropped by the Pervy [First] store selling products featuring Aleksandr Lukashenko's quotes. He was told that the merchandise sells well not only in brick-and-mortar retail outlets, but also at various holidays and festivals. Merchandise is often taken as souvenirs and gifts by foreign visitors from various countries. By the way, one of the new products has the autograph of Aleksandr Lukashenko.

The head of state also gave some advice regarding product design and emphasized that products should be affordable.

After leaving the Pervy store the head of state visited a furniture store, a meat products store run by one of agricultural companies, a porcelain store, catering facilities. In all these retail facilities he discussed working conditions, expansion prospects, possible difficulties and ways to overcome them. As usual, Aleksandr Lukashenko was offered to taste some products.